TaxProf takes note of two pieces in today's WSJ. One was an interview, on page 1 (i.e., a news page), of this year's winner of the Nobel Memorial Prize in economics, Columbia University professor Edmund Phelps. The other was an op-ed piece by Brian S. Wesbury, the chief economist at First Trust Advisors L.P. The two pieces clashed, with Prof. Phelps suggesting higher taxes ("[I]t would be a good thing for the federal government to raise taxes and run big surpluses until we have retired the public debt. In the short run the higher tax rates might be unpleasant. But in the long run, with the debt reduced or eliminated, incentives to work or to advance in the world would be enhanced, because after-tax pay rates as a proportion of wealth would be higher.") and Wesbury recommending that we stay the Bush tax cut course.

Presented in this way, it would appear that there are merely two economists who simply reach different conclusions after reviewing the same data. However, further investigation of one portion of the Wesbury piece exposes his essential intellectual dishonesty. Specifically, he states that:

While it is a little wonkish, there are good reasons why economists typically do not use the household survey, but instead rely upon the indice known as the "Employment, Hours, and Earnings from the Current Employment Statistics survey (National)." Barry Ritholtz explains the reason that the household survey, unadjusted, was misleading. His conclusion:

Let's see who has the intellectually honesty to step up to the plate with a big mea culpa. You may assume any of the original advocates of this now totally untenable position [that the unadjusted household survey is more accurate] who adhere to it are little more than partisan hacks, and disregard them as appropriate.

Just so the record is clear, here's the Employment, Hours, and Earnings from the Current Employment Statistics survey (National) on a monthly basis from January, 1992, through September, 2006: 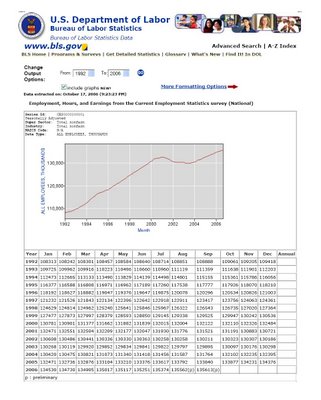 In the end, the Nobel guys tend to shoot straight. They get on the first page of the WSJ. On the other hand, "partisan hacks" are relegated to the knave opinion page.

Posted by Stuart Levine at 9:42 PM