Republicans also deserve credit for financing the war, which is more than many Democrats say they'll do if they run Capitol Hill. The extension for two more years, through 2010, of the 15% rate on dividends and capital gains will also help sustain the economic growth that is throwing off record revenues to pay for the war even as the budget deficit declines.

Let me get this straight: The Republicans financed the Iraq War by failing to finance the Iraq War?

From the Center on Budget and Policy Priorities, we find this graph which exposes the WSJ's editorial bull: 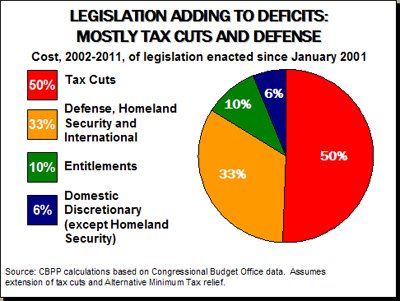 As with almost all Republican argument today, Orwell is the best reference:

"The key-word here is blackwhite. Like so many Newspeak words, this word has two mutually contradictory meanings. Applied to an opponent, it means the habit of impudently claiming that black is white, in contradiction of the plain facts."

Hat Tip: Brendan Nyhan.
Posted by Stuart Levine at 12:52 AM