Deja Vu All Over Again--WSJ Edition

Today's WJS editorial page touts the decline in the size of the budget deficit from the amount previously projected. Iit, correctly, attributes the decline of the deficit to increases in tax revenue. (The CBO press release on the deficit number is here.) However, it incorrectly finds that the Bush tax cuts are the underlying cause of the increase in tax revenue.

Jim Maule figured out that the WSJ editorial was baloney three months ago, before it was even published. He said then:

Members of the Administration are touting the revised deficit estimate, and its cause, as a sign that tax cuts are working as intended. Excuse me, but that makes no sense. Without the tax cuts there would be little or no budget deficit. So we're supposed to cheer because the mess isn't quite as bad as it appeared to be? I'd be impressed if the revision showed a budget surplus, because THAT would demonstrate the validity of the "cut taxes, double revenue" nonsense spouted by the "I refuse to pay taxes because I'm special" crowd and the "I cannot pay taxes because I'm selfish" group.

A closer look at the source of the increased tax revenue is most revealing. A significant chunk of it reflects increased corporate taxes, a natural consequence of the huge increase in corporate profits during the past half-year. Most of the rest reflects taxes on high-income taxpayers who have received bonuses. The Washington Post article goes into greater detail on these points. It also explains that taxes on wages are barely increasing, because wages are increasing only slightly. In other words, the tax revenue increases are consistent with the shift of income gains away from the middle class and toward the very top of the income and economic ladders. The rich get richer ....

Making the situation worse are the allegations that the Administration initially overestimated the deficit so that it could return and claim that it deserved kudos for reducing it. That's a ploy not unlike the child who says to a parent, "Would you be upset if I told you I broke the heirloom vase?" only to follow-up with the following comment to the rattled parent, "Well, I didn't. It's just that the picture window is broken." There's one word to describe this approach: manipulative.

The CBO report explicitly notes that:

Steady growth in corporate profits probably explains most of [the increase in tax revenues in September, 2006 from those in September, 2005], although some of it likely stems from settlements of past years’ taxes and a recent change in tax law that required large firms to accelerate some payments from 2007 into 2006.

Paul Krugman also pinpoints a different cause for the growth in corporate profits (behind Times Select Paywall), than that offered by the WSJ:

[A]fter-tax corporate profits have more than doubled, because workers' productivity is up, but their wages aren’t — and because companies have dealt with rising health insurance premiums by denying insurance to ever more workers.

This, of course, would also explain another "surprise" the WSJ editorial focuses on--the fact that the top 1% of all income earners account for 37% of revenue receipts from the individual income tax.

Angry Bear also anticipated the WSJ editorial when he published this chart from the CBO's August, 2006, estimates and made the following comments: 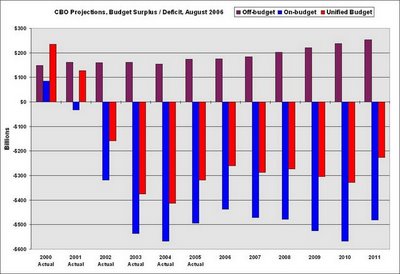 But compare 2006 to the earlier CBO estimates - 2006 is a complete disaster. And the bad news is another bubble is bursting right now (the housing bubble), and IMO the CBO estimates are once again ignoring the budget implications of that bursting bubble.

So when the Bush Administration touts their budget progress in the coming weeks, remember where we were just a few years ago. And remember where the budget deficit is likely to go. They call that progress?

Well, the WSJ editorial board certainly does.