The State of the Estate (Tax)

As a consequence of this change, the percentage of decedents' estates that are subject to estate tax has fallen dramatically as this graph shows: 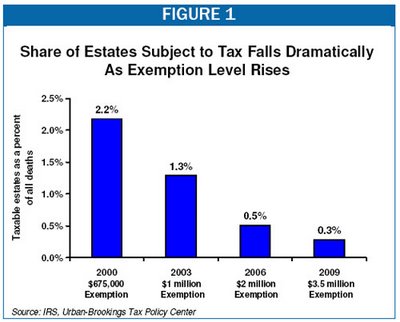 The CBPP also reports that the small business/small farm poster children constantly trotted out by the pro-repeal forces really has no current basis in fact:

The Congressional Budget Office estimates that, had the 2006 exemption level of $2 million ($4 million per couple) been in place in 2000, the number of taxable farm estates would have dropped by more than 90 percent, and the number of taxable family-owned businesses by almost three-quarters. At an exemption level of $3.5 million ($7 million per couple), as will exist in 2009, fewer than 100 family businesses and only 65 farm estates would have paid any estate tax.

And, among this rather elite group, it is unlikely that any would have to sell the family farm:

The CBO considered the question of whether the estate tax forces family farms and businesses to be sold. CBO found that of the few farm and small business estates that would owe any estate tax, the vast majority would have sufficient liquid assets (such as bank accounts, stocks, bonds, and insurance) to pay the tax without having to touch the farm or business. For instance, at a $3.5 million exemption level ($7 million per couple), only 13 farms would have faced such a liquidity constraint. Furthermore, those farm and business estates facing liquidity problems would likely have other options available to them — such as spreading their estate tax payments over a 14-year period — that would allow them to pay the tax without having to sell off any of the farm or business assets.

Of course, there are real victims of the estate tax. The Bush Cabinet for example. And let's not forget the family of Bill Frist.
Posted by Stuart Levine at 10:45 PM

But, of course, you leave out the rich bastards from the other side of the aisle: Nancy Pelosi, Barbara Boxer, Diane Finestein, and John Kerry Heinz, who, by the way, fought in Vietnam. Oh, but they're not counted, because they CARE.