There's another good CRS report out, this time on federal spending. The report, Federal Spending by Agency and Budget Function, FY2001-FY2005, shows that non-military discretionary spending is fairly insignificant in the overall budgetary framework. Simply put, unless entitlements and the military budget are cut drastically, we cannot "save" ourselves out of the current budget deficit.

The top six budget functions, combined, accounted for 86.1% of federal expenditures in 2001 and 84.8% of federal expenditures in 2004. Five of the six (Social Security, Income Security (which includes unemployment compensation, food and nutritional assistance, and federal civilian and military retirement), interest on the federal debt, Medicare, and health benefits (which include Medicaid) are not discretionary. Moreover, as the report notes, "much less than the 30% to 40% of the budget considered discretionary can be reduced through appropriations alone" because:

The report has a table which shows federal outlays by budget function expressed as a percent of total outlays: 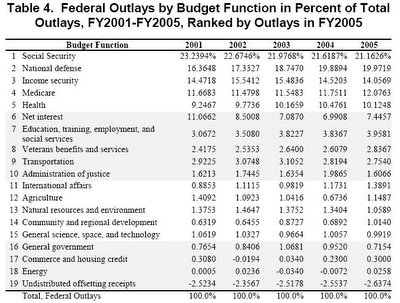 Of course, there are winners and losers. Thus, there has been a dramatic increase in expenditures on the Executive Office of the President from $246 million to $7.725 billion. (For you math majors, that means that the amount of spending in 2005 was 31.4 times that for 2001.) Of course, there had to be some belt-tightening. The EPA, for instance, was held to an increase of only a little over 7% for the period covered, with spending actually falling from 2004 to 2005.

The summary of the report has it right:

Without a substantial reordering of the public's priorities as reflected in the government's allocation of resources, most spending reduction efforts seem destined to remain relatively small and, thus, are likely to have a limited effect on overall federal spending.

Hat tip to beSpacific.
Posted by Stuart Levine at 12:04 AM